Pickling onions was one of the first things I ever tried in the preserving world. And the result obviously led me to a super fun world of canning! This very simple recipe will leave you with a few jars of yummy pickled onions, that are ready to eat same-day. They make a great addition to salads, sandwiches, burgers, pizzas, or wraps. I even dice them up and add them to dips and dressings sometimes. And the best part about pickled onions is that they last for a really long time!

This post contains affiliate links. If you make a purchase through one of these links, I will receive a small commission at no cost to you, and you’ll be supporting the site. Thanks!

Getting to Know Pickled Onions

I remember when I first became interested in canning and preserving foods, I wasn’t a huge fan of pickles. This initially seemed like a problem since in my mind, the only thing you could can was pickles and jam. I made a point of trying a bunch of types of pickles for a while and slowly I  started to find the things that I liked. (See Pickled Beets) But finding pickled red onions was probably one of my favourites. The first time I tasted them was at a restaurant I worked at in Toronto. We would thinly slice pearl onions (the bane of my existence at the time) and soak them for a couple hours in a vinegar/sugar mix. Then serve them that night on a number of dishes as a topping or edible garnish. They were tart and sweet, and the pickling cut through the harshness of the onion just enough that I could eat them by the spoonful.

Since then I’ve seen a few different commercial kitchens do a similar sort of quick pickling with their onions. The idea always seemed to be to serve essentially raw onions, but have them be a little easier on the digestion. Eventually I decided on my own technique, and I’ve been adding them to a lot of foods ever since.

Once I started making these I ended up putting them on almost everything. Obviously burgers, and hot dogs were a good place to start. But I love them on a salad with blue cheese and grilled chicken. Or in a panini with brie, and pesto. They’re even good on pizza. They are also very yummy as a topping for roasted meats like lamb or pork. It’s pretty old fashioned, but makes sense. When you have a rich and fatty meat, using something vinegary and tart can cut through that, and make it much easier on your yummy.

These pickled onions can be used within a couple hours of making them, and will get better over time. The trick to getting use out of them very fast is to slice your onion nice and thin. The thicker the slices, the longer it will take for the vinegar to fully penetrate the onion. Nice thin slices mean you can prep them early in the day and be able to use them that same night with your dinner!

I can’t stress enough how important it is to use a good sharp knife when you’re cutting thin strips like this. Not only will it lessen the stinging onion fumes, but if you cut yourself, the cut will hurt less. Weirdly, the sharper your knife the safer you are. I know it’s weird, but nice clean cuts hurt less and heal more easily. If you’re in need of a good knife but don’t want to shell out $400 for something crazy fancy, I would recommend this one. Henckel makes some of the best “utility” knives I’ve ever used. They’re durable, and easy to work with. This isn’t a paid promotion by Henckel, I just really love their knives for general purpose use. 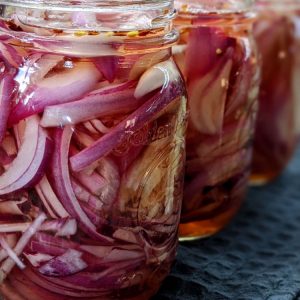 This nest is Really very good for snuggle piles. #

We had to move our sectional couch away from all t

And part 2! Assembly! Laying in the mosses, planti

I was gifted some beautiful new glassware for terr

While driving in the blizzard last week, I guess I

Koschek is so good at the programming. He is alway

A little bit of #raclette for my and Mike Christma

Mike making friends with the lovely Kingsley this