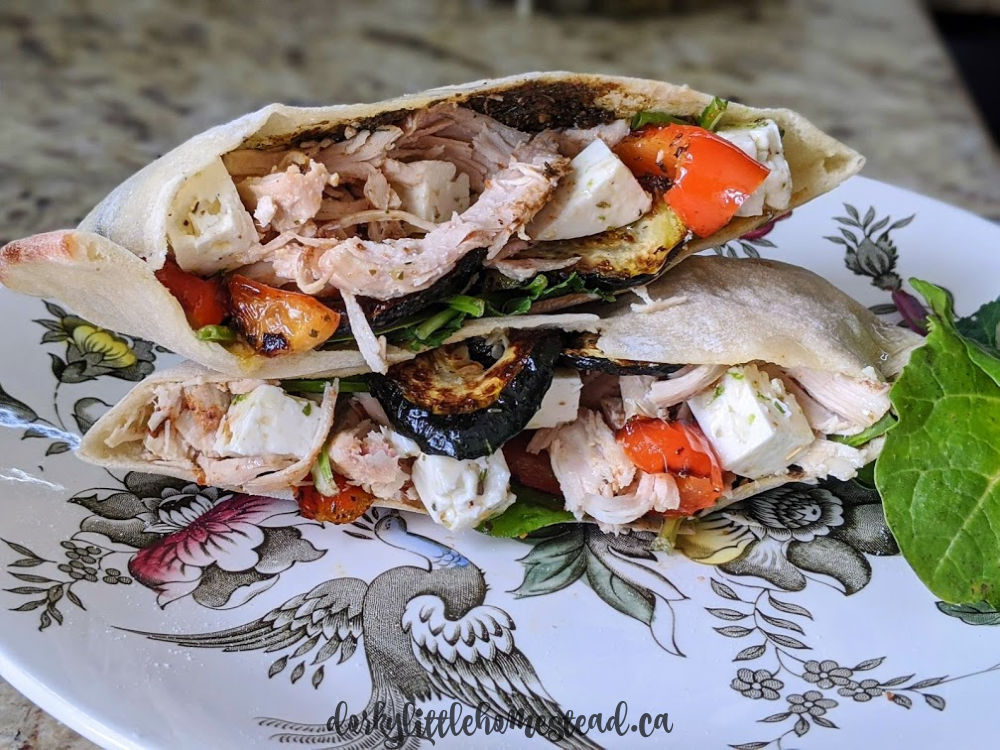 With all the new bread making that has taken the world by storm, it’s hard to not get swept up in it. This means experimenting with new styles of bread (like pita bread). Then realizing that you now need to eat that (pita) bread. And then being filled with inspiration of all the tastiness that can go into (pita) bread. Okay, if it’s not clear, I made pitas. And they were delicious, as well as not hard to make, yay! So it wasn’t much of a jump to stuff them full of shredded chicken and roasted veggies.

This post contains affiliate links. If you make a purchase through one of these links I receive a small commission at no cost to you. Thanks!

These ended up being Mike’s lunches for the week, and were a huge success. I packed all the parts and he assembled the pitas at work. As packed lunch prep goes this one was a bit of a stretch, but still worked!

The desire to make pitas was one of the reasons for this recipe coming about. Though, truthfully there were a few reasons. Due to being in quarantine, I’m trying to cook/process our foods in ways that will help them last a bit longer. So when we get cheeses or fresh veggies, my goal is to have them involved in multiple recipes through the week. Or to have them last slightly longer then they might originally.

Roasting veggies is a great way to have them last in the fridge a bit longer. And if the veggie in particular is looking close to the end of it’s pretty life, roasting them is a good way to revive them. I had bought a large number of red peppers in order to make and preserve some Roasted Red Peppers. So some of those got added to the mix, along with a couple zukes that were starting to lose a bit of their bright freshness.

The next addition needed to be a bit of cheese. What we had in the fridge was some feta that was beginning to get a bit dry. An excellent way to reinvigorate feta is to marinate it! With just a neutral oil and some herbs you can get that feta tasting pretty awesome in no time. You can marinate the feta in pretty large quantities and keep it in the oil in the fridge for a good month. The flavour will become more intense the longer it sits in the marinade. If you use olive oil, the oil will solidify in the fridge. It’s fine if that happens, but you’ll need to let it come up to room temperature before using it.

For making your own pitas, you don’t need any special equipment. They really are super simple. I did a few in my cast iron skillet, and a few on my pizza stone in the oven. But a standard frying pan will work just fine. 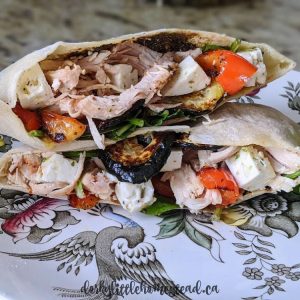 As the chicks get bigger they required an upgrade

I keep forgetting to do a chick update! Things thi

One of this weekend's projects was making this hug

Well, bit of a bummer day today unfortunately. It