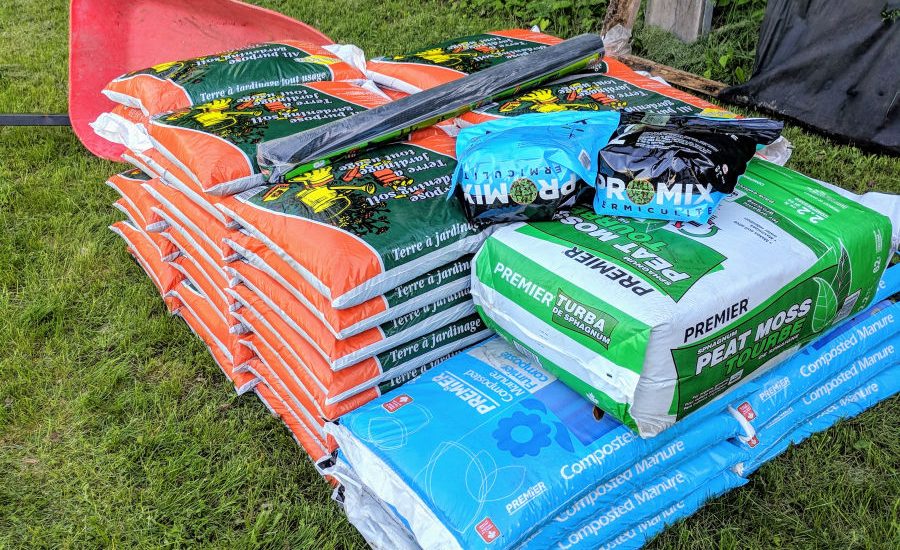 One of the many benefits to using raised beds is that you get to pick your soil mix yourself. This saves a lot of time that would normally go towards amending bad soil. The mix we use for our raised beds is pretty straight forward and ends up being very balanced for whatever we’re growing.

We use a 4:1 mix of black earth to Sheep Manure compost, then add 25% Vermiculite and 15% Peat Moss. These three give us a nutrient rich soil that isn’t too heavy, while still maintaining moisture. Below are the benefits of each of our ingredients, and then we’ll talk about mixing it up.

Vermiculite is hydrated Laminar Minerals that look like mica. It’s heated to an extreme temperature that causes it to expand into an accordion shape. The heating process also makes horticultural vermiculite sterile, non-toxic and it won’t break down over time. Though vermiculite is sometimes replaced with perlite in garden mixes, it has superior water retention capabilities and nutrient retention capabilities. Those are the two main reasons I love it for our raised beds. When mixed into soil it helps roots to more easily absorb potassium, calcium and magnesium. It is normally mixed at around 50% into soil and compost.

Peat moss is made from decomposed spaghnum moss that grows in peat bogs. Over millennia, the moss breaks down anaerobically, giving it several benefits to a soil mix. Just like vermiculite, peat moss is sterile and won’t break down over time. This means it lightens heavier soils, allowing drainage. It also can hold several times its weight in moisture.

Both of those attributes make peat moss a good moisture moderator in a soil mix. If you are having a draught or a very rainy season, the peat moss will retain water very well, but also allow excess to freely drain away. Peat moss does tend to be a bit more acid, so we only add it to our mix in small amounts and work extra in separately to beds with acid loving plants. It also has some environmental concerns, as it isn’t a renewable resource, so using sparingly is key. Thankfully as it doesn’t break down easily, a little goes a long way.

Sheep manure is a great addition to a soil mix because it’s what’s known as a cold fertilizer. This means it comes from animals who poop in pellet form like rabbits, and sheep. These pelleted poops end up being lower in nitrogen and almost odor free. This means it doesn’t need to be composted before adding it to soil mixes as it won’t burn your plants roots. The little pellets are a naturally slow release fertilizer that’s high in Phosphorus and Potassium. Combining it with a basic black earth means you are releasing high quality organic matter to feel beneficial soil organisms, leading to nutrient dense soil. If you know a sheep farmer, they will likely sell or give you some of their manure, just do your best to find someone who doesn’t use a lot of chemicals. If you don’t have a sheep farmer near by thankfully bags of sheep manure will only run you about $3 each.

We were filling quite a few raised beds last summer and ended up needing about 100 cubic feet of soil. That’s a lot to be mixing by hand. Our strategy was to do it in parts, and with a few sets of hands.

If you divide out all your bags so that you are making 5-6 batches with all the same ratios you will have a much better time of it. Next you’ll need a large tarp, preferably one that doesn’t have holes in it. Lay out the tarp on the ground, near to the box you’ll be using. Slice open your first round of bags along the bottom of the bag. Then lift and allow the contents to fall into a pile in the middle of the tarp.

With a person on at least two sides of the tarp, start lifting the edges so that the soil in the middle lifts, flips and stirs itself up. Changes sides a few times to flip the pile in different directions to stop it from falling off the tarp. Giving a few kicks from underneath while you’re lifting helps too. It should only take a couple minutes and you’ll have a thoroughly mixed pile.

Then with another set of hand you can lift the tarp full of dirt and pour it into your raised beds. Repeat for all your beds. Easy Peasy!

For more about why I use raised beds check out this post here. What’s your favourite soil amendment and mix? If you have any tips I’d love to hear them, Happy Gardening!