Leek & Potato Soup has become one of our homestead go-to recipes in the winter. Growing both leeks and potatoes throughout the summer, and storing them away allows for this ultra comfort food in the cold months. This soup is rich, and hearty; perfect for warming you right to your core, alongside some crusty bread and a cup of tea.

This post contains affiliate links. If you make a purchase through one of these links, I will receive a small commission at no cost to you, and you’ll be helping the homestead. Thanks!

There’s something very rustic and homey about a leek & potato soup. I first ate it when I was living in Scotland, and loved it immediately. And once I got into the culinary world, I learned that it’s a soup that really covers the western culinary world. Which makes sense. Both leeks and potatoes are sturdy, easy to grow veggies that can be stored well. So any group of people growing them would likely come to this delicious conclusion at some point.

The history of leek & potato soup tends to be murky because of that though. Many will say that it was an American invention, while others point to the cold style Vichyssoise from France. All regions of the UK and The Republic of Ireland have versions as well, and will claim invention. But honestly, I’m just happy it exists. And every style of Leek & Potato Soup I’ve had has been delightful. So I say taste as many versions as you can, enjoy them all, and make it way that makes you happy.

As I’ve said, we grow both leeks and potatoes in our garden here. We don’t get a huge bumper crop due to our space. But I always make sure we have at least some of both to store away for the winter. (My post on How to Harvest and Store Leeks here.) If our potato crop is very large I will also can some in our pressure canner. Those are great for quick roasted potatoes. Freezing leeks is a great option here as well. If you don’t have a spot for cold storage and you know you’ll want soup down the line, slice and freeze those leeks.

Be Kind to Your Body

When January and February roll around, my body craves soup. After feasting through the holiday season I don’t like food shaming and don’t agree with dieting. (Thanks, years of eating disorders and body dysmorphia!) But what I do believe in is treating our bodies will love and care. Soups are a great way to get nutrient dense meals that are easily digestible. Easy to digest after festive eating is my jam. I love all soups for this, but pureed soups always feel extra easy on the intestines. Having a Blender or Immersion Blender is a good idea if you’re getting into the soup groove.

I have two favourite additions to Leek & Potato Soup that I think make this soup extra delicious. First, not only does bacon make a pretty garnish, but I also add it to the soup itself. It goes into the pot first thing and has plenty of time to cook and break down. That way you can puree it later. You’ll have a nice smooth soup, with wonderful bacon taste. Secondly, I like to give this soup an extra umami kick by adding the rind of a parmesan chunk to the simmering process. It’s good if you have the freezer space to hold onto those parmesan rinds. Throw them into sauces and soups and you’ll be surprised at how much flavour they add. Watch how much salt you add if you do this. It’s best to only season right at the end, after removing the parm chunk, that way you won’t overdo it.

If you’re getting into the soup season with gusto, you’ll need some stock! Check out my Basic Stock recipe or this delicious Beef Stock recipe. Happy Soup Making! 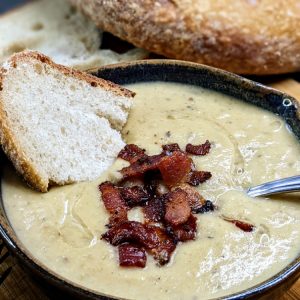 I've been working on the next set of leather cutti

It's hard to take pictures of glass terrariums, bu