Wow. What a busy couple weeks this has been. With both of us working full time jobs, getting the construction finished has been tricky. We did manage to get a big chunk done, and only have a wee bit left.

If you missed Part 1 of the construction you can check it out here. We planned out our boxes, and decided what we were planting, and where (using my favourite garden planning app The Old Farmers Almanac Garden Planner). Finally, we got all the beds built and dug into the hill. If you want to see our tutorial of building the raised beds, check out This Post.

This weeks projects involved a lot more heavy lifting. Our legs are feeling very worked out! We started by filling the boxes with soil. My Soil Mix is one that I’ve used for a few years, and it’s one that works well for raised beds. In the past we haven’t needed as much so we used to buy bags of black earth from the garden center.

This year we needed 4 cubic yards. So buying many small bags of soil was not very cost effective. Instead, we called up a local landscaping company and had them delivery a big pile of garden soil. That way, all we needed to do was add our amendments and stir it up.

The next big step was putting up a fence around the garden area. I’m determined to get as much out of this years harvest as I can, which means not having chickens dig up every bed.

We also live in a very forested area, and have plenty of other critters who wander through the property. So blocking in the garden was pretty important.

We decided to this deer fencing. It’s lightweight but very strong, and ended up being very easy to work with. It was slightly more expensive than other types of garden netting, but we really need this fence to hold up, so it was worth it. Next all we needed was some T-Posts and some wire.

I’d never installed a fence before so this was oddly fun, albeit a workout. We spaced the posts at slightly different distances around the border of the garden, but on average they are 7.5’ apart. The differences arose in some of the oddly shaped sections, where we had to go slightly more or slightly less than that. The posts we bought were 8′ and we put them into the ground only about 2’. We were going to do 3’, but our land is very thick clay and 2’ actually held incredibly steady.

The last part of this weeks work was to construct a gate, so I don’t need to climb the fence everytime I want to garden. (Or just live in the garden all summer. Sounds awesome, but I doubt my job would pay me for that!)

The section of fence where the gate goes isn’t perfectly even ground, and we also weren’t sure if we wanted to spend a huge amount on gate hardware. So we got a little creative. We bought some of these metal brackets from a Rona and attached them to our irrigation post.

Next we stapled a 2×4 onto the end of the fencing. So when the 2×4 is stretched across the gap, it can be tucked behind the brackets and held tightly in place. We put a few handles onto the 2×4 to grab it from the inside, and it works really well! Much easier to use than I was originally expecting!

We now have a “safe from chickens” garden area, with lots of soil filled raised beds! This weeks progress was physically hard but so fun and so worth it.

The next thing we need to do is set up our irrigation. Some of the tubing was laid out this week to mark places and get a feel for what we are working with, but it isn’t a functioning system quite yet. The last post with go through that system. Ideally within the next week there will be timer run irrigation and lots of impatient seedlings getting planted!

Stay tuned for that update. And if you missed Part 1 or our Raised Bed Construction tutorial you can check those out too! 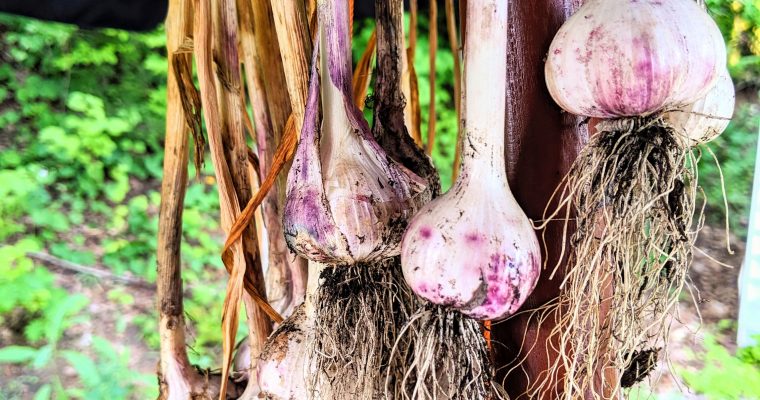 Growing garlic is possibly one of the coolest things to do in your vegetable garden. Especially if you’re a garlic lover like so many people are! All it takes is time and patience, and you can grow an abundance of garlic in your own backyard. […] 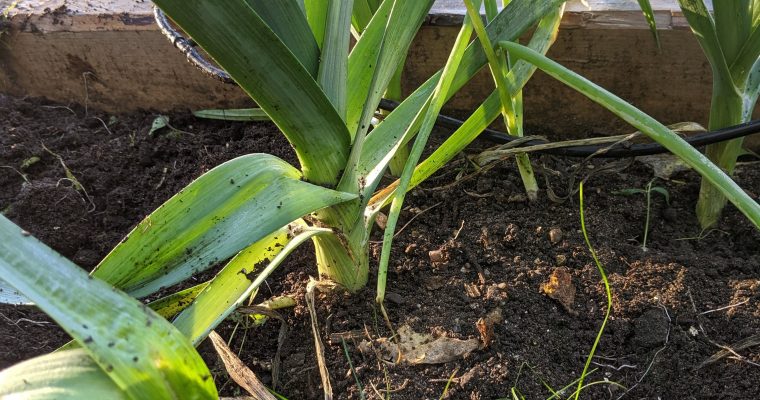 Leeks are one of my favourite vegetables, and growing my own is such a pleasure. They’re one of those veggies that you can plant and basically just leave to their growth. In this quick post I want to go through how to harvest and store […]

The cutest miniature thing I made today: This ador

And here it is coming together, and then finished!

All of the finished bits for the next mini I'm bui

My newest obsession is making miniatures. And this