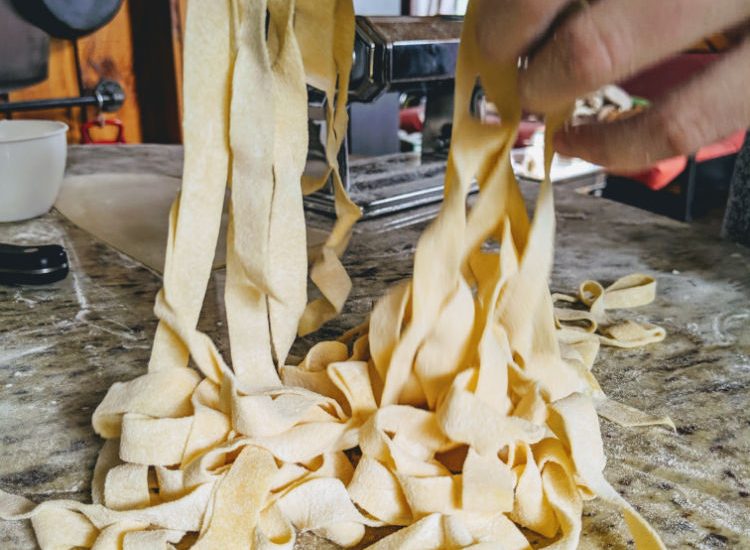 Making pasta dough from scratch is really fun. It’s a great way to spend a quiet afternoon, and the dough is also very simple. If you’ve never tried making it before it is well worth giving it a shot. Nothing makes your homemade Italian dishes feel more authentic, and it’s a great recipe to have up your sleeve for those days when you need to impress a guest!

The first time I made fresh pasta was at culinary school. It was fun, but we weren’t using a pasta roller, we were using rolling pins. If you want a very tiring, albeit authentic method you cuold try it. But honestly, it’s exhausting and kind of takes some of the fun away.

The trick to really perfect pasta is to roll your dough thin enough. And rolling it thin enough without a pasta roller is hard. So my first recommendation is to invest in one. They aren’t too expensive and are fully worth spending the money on if you’re keen on pasta making. I’ve heard of options that are electric, and ones that attach to Kitchen Aid mixers, but mine is one like this, and it works wonders. It clamps to the counter and is operated by a handle. We used this model at school as well.

Fresh pasta dough can be very simple or quite complicated, depending on what you put into it. My recipe is pretty darn simple. There’s nothing wrong with more complex recipes, so once you’re comfortable with a basic recipe, definitely try out some of the fancier ones.

300g Flour (If you can get ‘00’ Flour use that. It’s meant for pasta and pizza making it easier to work with.

You can do this in a mixer or a bowl. Sift the flour into a bowl along with the salt. Make a well in the center and add the eggs and egg yolks. Mix together until a rough dough begins to form. Begin kneading the dough. It will feel a little stiff, but if it’s much too dry spritz it with a bit of cold water and keep going. Knead it until it’s smooth and elastic; by hand this is about 7-10 minutes. In a mixer it’s about 5-6minutes. Divide the dough into two pieces and wrap in plastic. Put them in the fridge to rest for at least 25 minutes. Pasta dough really does need the resting time or else it will be much too elastic to roll out.

Clamp your pasta roller to the edge of a clean counter. You will need a good amount of space for this, so clear up a large section of counter. The roller has a dial on the side that adjusts how large the opening is; set it to its largest setting. Have a small bowl of flour and a knife ready as well.

Take your first half of the dough out of the fridge and cut it in half. Form the half into a more even oval, and flour it liberally. The first couple passes through the rollers are all about building up body in the dough and making the dough a better shape for further rolling.

Now that you have your first roll through, fold the length of dough over on itself into thirds like a letter. Flour it well again. Feed it through a second time on the largest setting with the openings of your fold going through the roller first.

Fold the dough into thirds a second time, again dust it with flour, and again pass it through on the largest setting. Your dough should now be a more even rectangle, and you’ll start to notice that the pasta dough is starting to have a more even texture. Now the dough length can just be passed through to increase its length, without folding it.

Flour is your Friend!

Remember that flour is your friend here. You want to be flouring both sides of the dough well before putting it through the roller at each stage. It’s also good to put the pasta dough through at each setting twice. Starting at the widest setting you want to gradually move down to lower and lower settings, while your dough gets longer.

At around the midway point (on my roller thats level 4) cut your strip of pasta dough in half. Set one half aside and keep rolling the other half. Otherwise your length of dough will become way too long to handle easily.

Once your pasta has been through the lowest setting on the roller, the dough will be tissue paper thin. You should be able to see your hand through it. If the length is still a bit long for you, go ahead and cut it in half one more time before slicing your noodles.

If you’re making stuffed pasta like ravioli or just need sheets of lasagne then you’re done. But if you want long noodles like fettucine then it’s time to cut the pasta. Take one of your fully rolled sheets, and flour it very well on both sides.

Loosely roll the dough up, and using a sharp knife, slice the roll into thin strips. When you unroll the strips you’ll have nice noodles. Toss the noodles with flour to loosen and separate them. They can be set aside dusted with flour and allowed to dry slightly while you roll the rest of the dough.

Cooking fresh pasta is great, since it only takes about 2-3 minutes. Bring a large pot of water to a rolling boil. Since the pasta is only going to spend 2-3 minutes in the water, you’ll need to add a lot of salt. The water should taste almost like sea water. Don’t freak out, you won’t be ingesting that much salt. But if you want your noodles to have a nice pasta flavour then the water needs to be that salty for them to pick up any salt in the short time they’re in the water.

It’s a good rule to remember about salting any cooking water. If what you’re cooking will be in the water for only a short period of time, then the amount of salt you add should be much larger. If you’re cooking something that will spend a large amount of time in the water, like dry pasta, rice, or potatoes, much less salt is needed.

So, cook your pasta for 2-3 minutes in boiling water, test it to make sure it’s still got some bite, and then drain it out. If you’re using a thicker sauce like a pesto, reserve about 1/2cup of your starchy cooking water to help loosen up the sauce.

This sauce is fun because it’s really fast. It’s fresh and perfect for a quick weeknight meal. Heat your oven to 400F. Take a couple big handfuls of Cherry Tomatoes (say one handful per person eating), and add it to a baking dish. Add 1 Peeled Clove of Garlic, and 1 Small, finely diced Red Onion. Drizzle the whole dish with a few good glugs of Olive Oil. Sprinkle with Salt, Pepper, and Chilli Flakes to taste. And finally, give it a drizzle with a little bit of Balsamic Vinegar.

Roast for about 15 minutes or until the tomatoes have started to char and burst. Remove from the oven and crush up the tomatoes and garlic with a fork. Scrape it all into a bowl,  Add a tbsp or so of the hot pasta water and another drizzle of olive oil. Toss it through your pasta, and serve with some fresh parmesan. Yum!