At our house, Summer food is all about fresh veggies and Barbeque! This cedar plank grilled salmon recipe is so easy that it is a must at our house through the season. Pairing the fatty salmon with soft Mediterranean herbs and a hint of spicy is perfect with the sweet, smokey cedar wood.  It is also a really impressive looking dinner that you could serve at your next get together. If you’re also a fan of barbequing, and haven’t tried plank grilling before. this should be something you make.

What is Plank Grilling?

Plank grilling is an old technique of cooking over fire, originally attributed to Native American culture (though some people believe it was brought over to the Americas by the Scandinavians, as it is similar to some of their techniques). In the Americas fish would traditionally be pegged to a piece of hardwood (Usually Western Red Cedar) and the wood was held over a fire. The fish would slowly smoke and become infused with the flavours from the would. As modern grilling came about the technique was adopted. All kinds of woods are used now, and some will pair better with certain things over others. But all of them are delicious. Try these Cedar Planks for this recipe.

Firstly, it looks pretty badass and fancy to put a smoking piece of charred wood down in the center of your table for guests. It’s a real show stopper! Definitely one to impress the neighbours with.

Of course, plank grilling has a number of benefits aside from looking really cool when you serve it. As anyone who’s grilled fish before can tell you, fish is delicate. Moving a flaky filet around on the grill can have messy and sad results. Using planks means you have a stable surface to sit the food on.

Lots of folks will move food around on the plank. Since I’m a huge fan of simplicity, I let mine just sit and relax. I have a glass of wine on the deck and the salmon does it’s thing. By letting the food sit still, it doesn’t lose as much moisture, and any that does drip out is absorbed back again.

As the bottom of the wood begins to char and burn, the smoke released cooks the fish and fills it with flavour. The benefit here (besides that killer flavour) is the protection that the wood offers. The last thing you want is to burn your fish to a crisp.

This particular recipe came about because I was craving something with a Mediterranean feel. Normally when choosing fish, I try to pick fresh water fish, I live in a land locked area so eating locally caught lake fish is more ideal. But today I was just dying for some of those yummy fats that only salmon can provide. Fish and seafood normally consumed in the Mediterranean is very high in omega 3 fatty acids, like sardines, bream, and salmon.

The flavourings I chose are also influenced from that area. The wood from the plank grilling needs to shine through so I went with soft herbs like oregano, marjoram, and parsley. With just a hint of paprika, garlic and chilli. And of course, olive oil. In case the salmon wasn’t already perfectly rich, I marinate it in the herbs and oil before hand. That allows the peppery flavours from the oil infuse with the salmons fat.

This recipe is simple, but oh so elegant. It’s bursting with flavours but doesn’t get all cocky about it. Truly lovely on a warm summer night Alongside some tasty grilled potatoes and veggies. Enjoy! 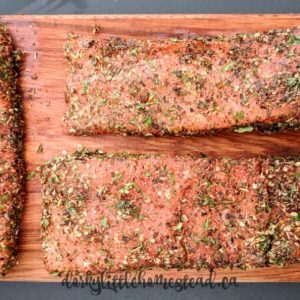