Meat sauce for spaghetti would be the more commonly found North American term. That’s what I would have called a meaty sauce on top of pasta until I spent some time in Scotland.

My mom used to make spaghetti with meat sauce lots and we loved it. It was quick and filling. We could smother it in cheese. What’s not to love? But it wasn’t until I was fed a Bolognese sauce by my dear friends mother, in Scotland, that I was truly blown away. Now there’s a good chance I am incredibly biased, because other then my own mother this woman is one of my biggest inspirations for what I do now. She grows her own veggies, she loves great wine, she makes fresh breads, she lives in a house that looks like an old castle for goodness sake! Seriously. I could gush for hours about her.

The whole weekend that I first spent in her home, I was in awe of her. I remember sitting in her kitchen just staring at her and her husband laugh and dance, while cooking some phenomenal scallop dish (that involved setting the pan on fire) like it was nothing. Just a lovely day in their little world. I was in love.

She must have taken the very obvious hint (basically staring at her and following her around continuously) that I adored her, and sweetly gave me a recipe for Bolognese sauce. The recipe below is probably slightly off from hers as it’s been nearly 10 years since she gave it to me, but it is still my favourite to this day.

Okay, I gushed. Back to the food.

Bolognese in Italian means, From Bologna. And though the actual origins of this recipe are highly debated, what’s clear is that we’re all talking about a ragu sauce from somewhere in the Bologna region of Italy. Always made with simple, local ingredients, it’s traditionally served with taglietelle or other wide noodle like papperdelle. Not the spaghetti that we tend to eat with here. It also wasn’t as elaborate as some of the recipes you’ll see today (including my own)

The additions to my sauce, seem to have come from my friends family. They love good food, so adding things like herbs and garlic is not a stretch. This recipe also includes a small amount of tomatoes but not much. Most of the liquid is from the veggies letting off juices, a bit of wine, and stock. I also finish mine with milk, instead of the more traditional cream, and again that’s what my friends family did and I hadn’t ever thought to change it.

A word on Garlic

I add 4 cloves of garlic to this sauce, which is not only not super traditional, but also not for everyone. Add as much or little garlic as you like. I have also made this recipe once or twice using a roasted garlic infused oil instead of garlic cloves, which worked beautifully. And I guess in an infused oil garlic is easier on the digestive system. If you’re someone who is negatively affected by eating garlic, than that’s a good option.

A word on Parm

In the ingredients, you’ll notice it calls for the “butt end of a parmesan block”. I really am never sure what to call this, so it gets called the butt of the parmesan. I’m talking about the chunk of harder to grate rind at the fat end of your triangle of parm. If you’ve grated down to the end and can’t get any more off the block without dislocating a shoulder, save the end chunk! They last for ages in the fridge and you can throw them into your soups and sauces. They add a beautiful texture and cheesy taste.

I hope this recipe becomes a staple in your house as well. And I do recommend, if you have the time to let it simmer for a good long time. The flavour will be worth it. 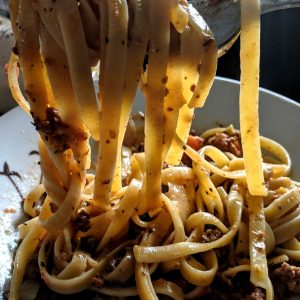 LizaLeigh
Based on a traditional Italian ragu and adapted by a woman who truly inspires me. I hope you find the same joy in filling your house with the smell of this sauce as I do.
Print Recipe Pin Recipe
Prep Time 25 mins
Cook Time 6 hrs
Total Time 6 hrs 25 mins
Course Main Course
Cuisine Italian, Scottish

We love our 3D printer (whose name is Janet) but M

I finally got my @mysteryteaminc sticker onto my c

The first wisps of smoke out of the Kamado 😃 I'

I also (FINALLY!) Reported my poor bay tree. I bou

Starting up the Kamado for the first test run toda

The newest edition to my cooking tools 😍 I'm so

Okay! I'm always done working on the redesign of t